Mahébourg, the imperial village, reveals itself!

Join us in Mahébourg and discover the village of Grand Port District, the most familiar and most important of the south-east of Mauritius…

When you visit Mahébourg, you will get the opportunity to travel back to ancient times of Mauritius. The streets, in straights line and the houses of traditional architecture, are the symbols of the colonial past of this village. This latter takes its name in memory of Mahé de Labourdonnais, governor of the island from 1735 to 1746. Then the name was changed to Port Impérial in honor of Napoleon. Later, when the British took possession of Mauritius, the village was renamed Mahébourg.

Panels recounting some facts of the history of Mauritius

During your walk on the Waterfront, take a look at the panels recounting some facts of the history of Mauritius. Further, you will see a sign situated near a trough where horses once quenched their thirst. The remains of the French and English occupation emerge on every corners of the village. There is a field named Terrain Gervaise situated near a former train station and an old cistern. Do you remember Gervaise? The old generation has not forgotten this intense tropical cyclone which devastated Mauritius in February 1975. Winds up to 241 km/h blown violently and did not spare Mahébourg… Some survivors, whose homes were demolished, settled on this location, hence the name of Terrain Gervaise came into existence. 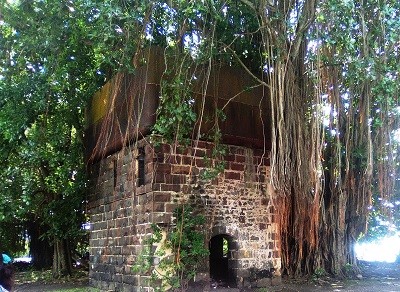 An old cistern, vestiges of the past

Speaking of cyclone, how about making a detour by Mahébourg during a tropical storm? This is one of the favorite pastimes of the villagers who admire the impressive waves of several meters pounding on the coast. If you look at Mouchoir Rouge Island facing the village, you will see the guardian and his family who live there. When a cyclone approaches, they leave the island for a safer location. 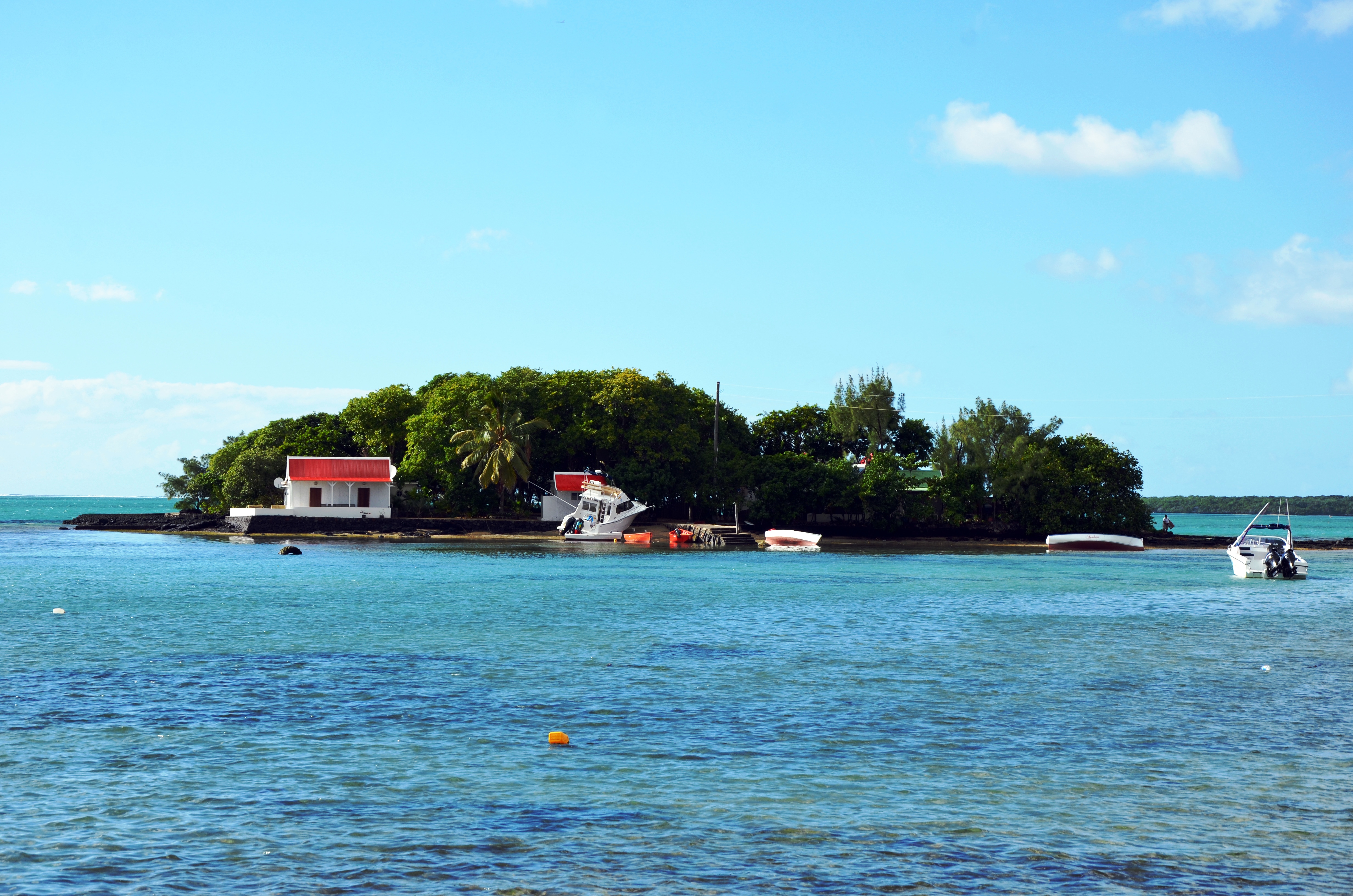 Do you know that Mahébourgeois are fond of fishing at the Waterfront? With patience, they cast their fishing lines in the sea hoping to catch a fish. We advise the persons who like fishing to go at Mahébourg in March and April. Be prepared for a unique fishing experience, since the “ti-rouget” came numerous on the coast of Mahébourg! 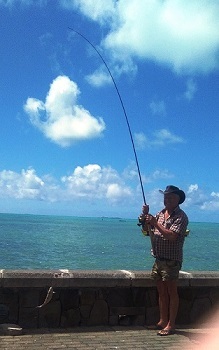 Other historic sites of Mahébourg will reveal more detail of whole sections of the village’s history, particularly the National Museum of History, former Naval Museum, which traces the naval battle between French and British. Let your senses be captivated by the Biscuiterie Rault. In the streets, you will come across typical Creole houses, which are, alas, disappearing since the cost of their maintenance is expensive. 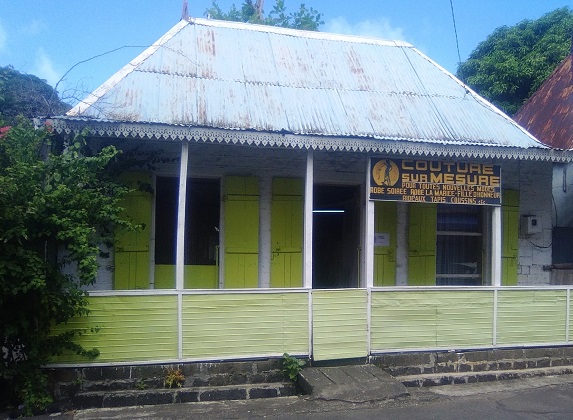 The bridge of Mahébourg, called the Cavendish Bridge - better known as the bridge of Ville-Noire - worth a visit. Early in the morning, the persons whom houses are situated near the sea, throw their lines to catch fishes. If the latter take the bait, for sure, they will end in the “caraille” and served as “gadjack” for the evening aperitif! 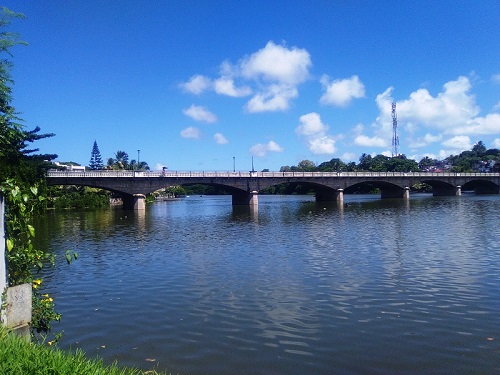 Curiosities and shops of Mahébourg

Besides the historical aspect of Mahébourg, this village charm its people who are not eager to live it, like Eddy, a craftsman who uses shells named coquille bonheur to make curtains and belts, among others. He was born in Mahébourg and has no intention to leave his village. His office is a stone bench situated near the sea. 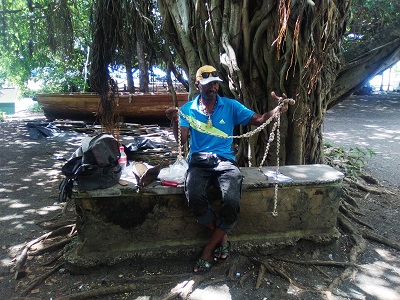 Gopaul will also take his last breath in Mahébourg. He started to work as a hairdresser at the age of 14! Today, Gopaul has 87 years old and he is still spry. In his hairdressing salon, made of wood, he has meticulously placed his tools and other creams. According to Mahébourgeois, when Gopaul shaves beard for men, this one grows after three days! Gopaul is indeed 87 years old, however, modern and eccentric haircuts have no secrets for him! 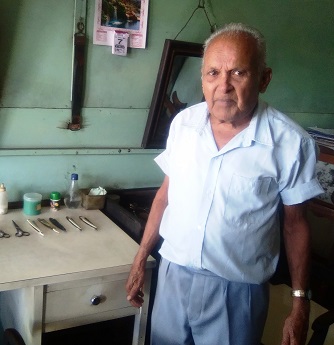 You will notice that most of shops of the village pass from generation to generation, like the two stores Chotta Peer specialized in the sale of cloth. Mr Peer, the father manages his business, supported by his brother and his son, Ashraf, among others. Four generations of Peer administer this store who proposed to its loyal customers, especially "old gran dimou", “paghri” or their "orni (turbans which are wrapped around heads). 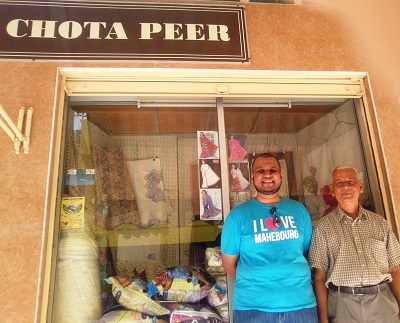 Mr Peer and his son Ashraf

Look at this canon dating from 1810. According to popular belief, if you place a card of Mahébourg above the cannon, it will indicate the village’s centre. It’s your time to discover if the legend is true or not!

Solidarity is not an empty word in Mahébourg

Further on the road, young men put up a project in order to give life to a shop which will showcase the creations of the artisans of Mahébourg. This is an initiative of Vishal Magraja, fan of pyrography. At 35 years old, Vishal is gradually losing his sight. This Mahébourgeois, always willing to help his peers, has formed young people to pyrography at Smeda. Now, the Mahébourgeois, known for their solidarity, are able to help Vishal to preserve part of his sight through concerts and other fundraising activities.

Other artisans are renowned in Mahébourg, as Hassan Khan who makes small boat models ready to sail. 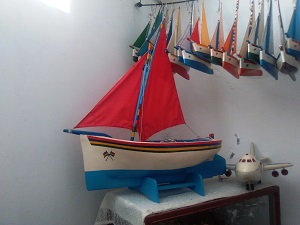 Places where you can eat in Mahébourg

Mahébourg, is undeniably charming for its inhabitants, also appealed to Mauritians from elsewhere. Such is the case of Zahra, born in Rivière du Rempart. Love brought her to the south of the country and, today, it is a smiling Zahra who is fully involved in the smooth running of Pyramid restaurant run by the family of her husband. This place offers the best Briani in the south and kebab rolls, and at cheapest price! Ten employees are busy in the back room to delight customers. The latter are queuing around in a good spirit, while the scent of Briani tickles their nostrils! 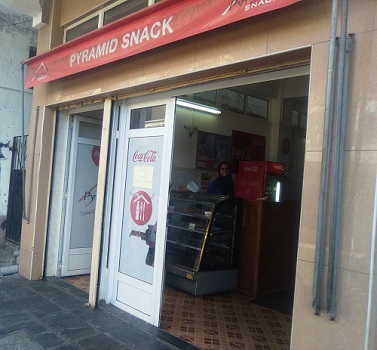 Pyramid offers the best briani of the south!

The youngsters like to join in the Kentucky Fried Chicken (KFC) of the village. It is so nice to enjoy a delicious burger after a hard day at school. Maybe they can be seduced by the fish of the sellers of the Mahébourg.

Something to know about: the fishmongers are always present, except on the 1st of January and when there is a cyclone. You want your favorite fish be cleaned and ready to cook? If so, give them a small tip.

Let us indicate you the best merchants of Mahébourg. Choose between The Taj and Gro Maraz to enjoy a dal puri, a very popular dish in the village. Sham, who also proposes dal puri, is a sensational vendor because of his rickshaw widely used in India. If you need vegetables, have a look at the bazaar where there are also traders who sell handmade products. The fair of vegetables and of textiles take place on Mondays.

The afternoon falls on Mahébourg and stores closed around 17h; it’s time for the locals to meet up just after the museum to enjoy grilling and other cakes. It is a moment of conviviality. Some villagers who remained in the center of Mahébourg meet at Sweet Corner to sip a Coke. 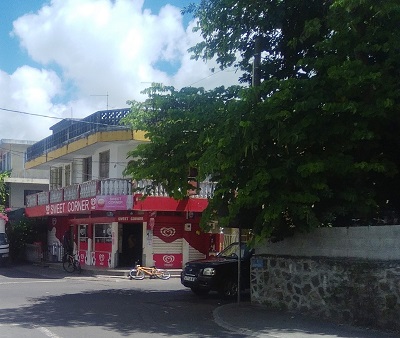 Regatta is the local sport!

In Mahébourg, trade sand, lime and fisheries have sustained many families. It remains from this period a tradition that perpetuates the regatta. They take place almost every month. It is the local sport in Mahébourg. At the Pointe des Régates, the whole village is excited. While villagers try to make precise prognosis on the race, the team of La Minerve is ready to face Prince, his historic rival! 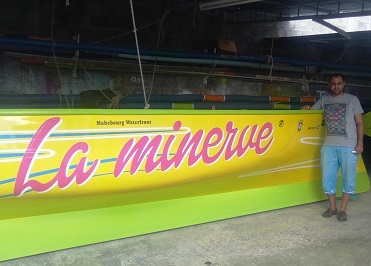 At sea, each team show who’s the cleverest on water. But, once ashore in the evening, all participants eat together around the winning team. One can make fun of the unlucky loser, his today’s opponent, and go fishing with him on the next day! Those races are good opportunity to party between villagers and establish an enviable supremacy until the next regatta. During each game, cordial flatteries are exchanged, adding to the colorful folklore of this event.

History leads to another sympathetic rivalry

The villagers are also excited by the existing competition between the respective students Duperré and Willoughby, two primary schools which face each other. It is so logic, since the French captain Guy-Victor Duperré faced Nesbit Willoughby, England captain during the famous Battle of Grand Port! For anecdote, the two captains were both treated in an old French colonial house transformed in the National History Museum. 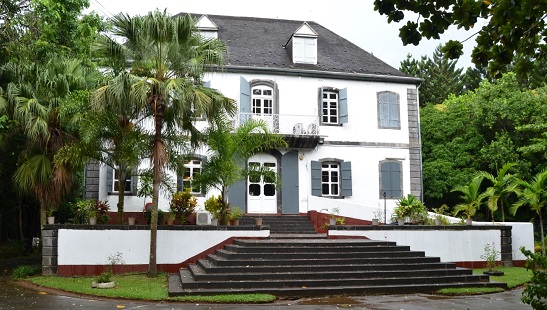 The people of Mahébourg are friendly, warm and always willing to help. Just go and have a look by yourself, knowing that the village is well served by various bus companies. Enjoy your time at Mahébourg and have a good visit!